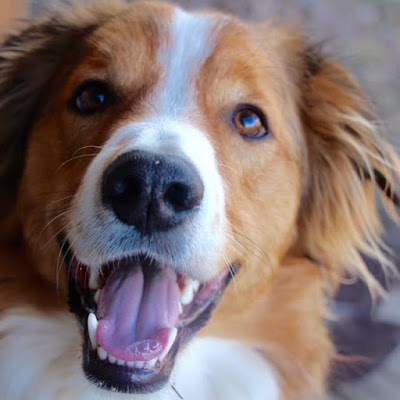 Heath had a very epic day today. TheMan woke me up early to get dressed, so Heath knew right away we were going to go on a road trip. He bounced through the house, picking up his toys and bucking and hopping. He gets terribly excited over little things. I wish I was more like him.

He had to have his vest put on so he would ride in the back seat, because he really, really likes to sit on my lap, but I really, really don’t like him there when we are on the highway, just in case. There is no way to turn off the air bag and it would be very dangerous for him if it were to go off. He doesn’t believe me and has much more faith in TheMan’s driving than I do, having not been born yet when we’ve been in a few pickles. 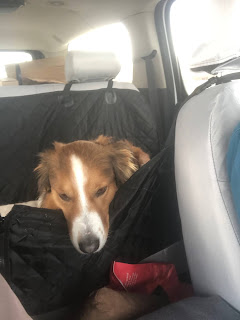 We went to Burns for meds and breakfast. That’s a two hour drive one way. I got a Denver omelette because Heath always enjoyed the ham. He decided yesterday he no longer likes ham. He did enjoy half of the biscuit though, so he was happy enough. We ran a couple more errands, then headed for Nampa, ID where we do most of our shopping. That was an additional 3 hours one way.

Mostly we stayed in the ‘burb while TheMan ran ranch errands. Then Heath and I made a quick trip to a bush for Heath and a bathroom for me. He peeked under the door and kept an eye on my wheelchair while I used the facilities. He’s very helpful that way. It also tickled him that his doing so tickled a couple of kids that were also in the restroom. Heath adores kids of all kinds. When he sees any of the grands, he actually squeals.

On the way back to the burb, he received several “He’s beautiful’s” and “what a gud boi” 's which of course, made his head swell. I took his vest off and let him just wear his new scarf that identifies him as an SD. He seems to like it much better as his vest shifts and makes him itchy and shake off a lot.

He slept under the desk while we had our taxes done then went to his favorite restaurant, Texas Roadhouse where he and I shared a rib steak. (No wonder he likes road trips!) After guilting TheMan out of his croutons and a few bites of his meat as well ( by setting his chin on the seat next to him and giving him sad, hungry eyes ) we headed to Costco which happens to be his favorite store, because lots of strange people give him “gud boi”s. He got an earful of them, and I know that HE knows they are talking about HIM because his tail always wags when they say it, although he looks straight ahead when they do. Sneaky little guy, pretending to be humble.

We were accosted just once, for not wearing a mask. I will refrain from sharing my thoughts on the subject which haven't changed since the beginning of the China virus to this day.

After leaving there, Heath snuffled in my ear to get snackies then he and I napped while TheMan ran a couple more errands for ranch stuff. We then we went to a car wash, for the first time ever, with the ‘burb. Heath was fascinated by the process and handled it so well, we went through twice. We then went to the dollar store and found a hedgehog for Heath. He takes very good care of his toys. He picks one out each time I get off the couch and carries it to the table or to the bedroom, and once a day he gets paid to pick them all up and put them back in his toy basket. It’s usually the highlight of our day. Yeah. That should tell you a lot about our normal day. *snort*.

Heath had been a gud boi all day, staying in the back seat without his vest, but at one point, we got our lines crossed and he sailed over the seat and up front onto my lap while we were on the highway. I told him to get in the back seat again. Instead of doing so, he turned to face me, put a paw on each side of my neck and burrowed his head in my shoulder. Dang. Not even a kid could work it this well. I ignored him for a few minutes, then again told him I wanted him in the back seat, so he begrudgingly crawled to the back and pouted.

Once we got to the ranch road home (which is 35 miles ) He nuzzled and asked permission to come up front. I conceded and he happily snuggled in and we slept together the rest of the trip home…and lived happily ever after.

God bless all and have a great day, week, month, whatever!

Petey and the Heathen

We went through the aisles one by one, got stopped by a worker who asked if the people at the entrance had given us masks. I told him they offered and to not  be angry with them as I had one.

I refuse to wear one, particularly one made in China.

I did not tell him that, but I had taken mine off for multiple reasons.

1) It makes me very claustrophobic to have something on, or close to my face

2) It makes it hard for me to breath

3) breathing your own co2 isn’t healthy

5) I’ve had multiple surgeries with 70-80% chances of recovery so a virus with a 99+% chance of recovery doesn’t particularly concern me, even though I am in a high risk category having a suppressed immune system and

6) My doctors are in a state that allows the actual CURES unlike Dem states like Nevada and California and others which made it ILLEGAL for Drs to provide HCQ which is part of the regimen which has had a 100% cure for those with early symptoms. I will leave you to ponder why the hell they would do that. Our President told us early in the outbreak about the efficacy of HCQ, when suddenly the MSM and Dem states began vilifying it as a dangerous drug (which many people have taken daily for decades without any issues, including our military) After Jan 20, 2021, that opinion was suddenly and rather quietly reversed. How many died because of the earlier fiction touted daily?

7)I trust God is in control and meant what He said when He told me everyday of my life was already written.

8) The people in my family who got the virus were mask wearers. 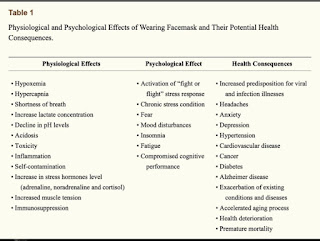 I showed the man my mask, and Heath and I rolled on.

Another lady in a wheelchair rolled up and stopped me to ask what the man said. I told her and she was incensed. She ranted awhile about how they had no right to tell people to wear them, particularly the disabled who often have problems which are exacerbated by them. I looked around at the warehouse full of healthy people wearing them, most likely thinking they were doing us a favor. It made me very sad. What else will they do unquestioningly because someone who is supposed to be a public SERVANT tells them to?

Again, I digress. Please forgive me. If you have a different opinion than myself, know you are welcome to it. You are free to wear a mask, a nylon stocking, a plastic bag or whatever else over your head that makes you feel safe. We are all free to make our own decisions. I believe those decisions should be based on personal research and common sense but there is nothing that says that's a requirement

Some of you may be cheering while others may be choking over what I just said. Please, before going further, allow me to mention, I am isolated from all human companionship so my time is spent doing online research searching for answers as well as entertainment. I have NO outlet to vent my ideas or feelings, save here, on MY blog. As a Conservative (horrors to some of you, I’m sure) I don’t demand any of you agree with me, but I also won’t be bullied.

Again I digress. I think this might be an issue for me.

petey
Deliriously happy ranch wife living on 250,000 acre ranch in SE Oregon, hours from town with a practically perfect ranch hand husband, cows, chickens, sheep, LGD's and an English Shepherd pup who is in charge of it all. Artisan Milk Soaps are made with milk from our own goats and Jersey cows